CFBA Tour-When Zeffie Got a Clue by Peggy Darty

This week, the
Christian Fiction Blog Alliance
is introducing
When Zeffie Got a Clue
WaterBrook Press (March 18, 2008)
by
Peggy Darty 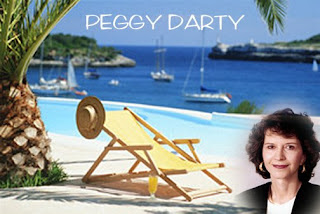 Peggy Darty is the award-winning author of twenty-seven books, including two other cozy mysteries set in Summer Breeze, Florida: When the Sandpiper Calls and When Bobbie Sang the Blues. She has worked in film, researched for CBS, and led writing workshops around the country. Darty and her husband call Alabama home but spend a great deal of time in Colorado, Montana, and on Florida’s Emerald Coast. 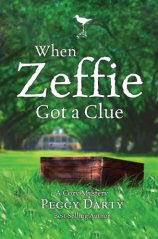 It’s an ordinary afternoon in Summer Breeze, Florida, when a young, wide-eyed girl steps into I Saw It First, the trash-to-treasure shop Christy Castleman and her Aunt Bobbie have opened. Clutching a jewelry box, Zeffie Adams tells Christy she needs money to pay her grandmother’s medical bills, prompting Christy to offer this curious visitor more than the jewelry box is worth–or so she thinks.

But complicated questions form when Christy rips out the box’s lining and uncovers a clue to a cold case murder mystery from eight years ago. Despite warnings from her family and handsome boyfriend Dan Brockman, Christy decides to do a little detective work of her own. After all, the infamous murder happened close to her grandmother’s farm. How risky could it be to take the jewelry box back to the Strickland plantation and ask around about it?

Soon Christy finds there is more to the small box than someone wants her to know. A jewelry theft. A mansion murder. Dangerous family secrets buried in history. Can Christy convince others to let go of the past before it’s too late?
Posted by Jim Black at 10:25 PM