FIRST Tour-Eye of the Oracle by Bryan Davis

I know it is early, but I will not be able to post on Dec. 1. The FIRST day of every month we will feature an author and their latest book's FIRST chapter!

This month's feature author is:

and his latest book:

Eye of the Oracle

Bryan Davis is the author of the four book Dragons in Our Midst series, a contemporary/fantasy blend for young people. The first book, Raising Dragons, was released in July of 2004. The second book, The Candlestone, followed in October. Circles of Seven debuted in April of 2005, followed in November by Tears of a Dragon.
Bryan is the author of several other works including The Image of a Father (AMG) and Spit and Polish for Husbands (AMG), and four books in the Arch Books series: The Story of Jesus’ Baptism and Temptation, The Day Jesus Died, The Story of the Empty Tomb (over 100,000 sold), and Jacob’s Dream. Bryan lives in Winter Park, Florida with his wife, Susie, and their children. Bryan and Susie have homeschooled their four girls and three boys.

To read more about Bryan and his books, visit the Dragons in our Midst Website or visit Bryan's blog.

The Seeds of Eden 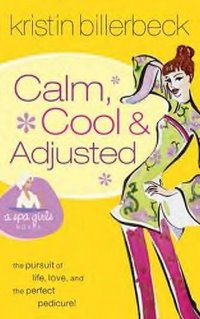 Kristin Billerbeck was born in Redwood City, California. She went to San Jose State University and majored in Advertising, then worked at the Fairmont Hotel in PR, a small ad agency as an account exec, and then,she was thrust into the exciting world of shopping mall marketing. She got married, had four kids, and started writing romance novels until she found her passion: Chick Lit.

Calm, Cool, and Adjusted is the third book in the Spa Girls Novels.

Billerbeck did a great job with the characterization of Poppy, a quirky Christian chiropractor who is a health nut. I'm talking real NUT. She is so obsessed with health that she forgets about living. When she finally realizes that she is over the edge obsessed, she doesn't know how to stop herself.

The third novel in the Spa Girls Series focuses on Silicon Valley chiropractor Poppy Clayton, who is as calm, cool and adjusted as they come. Or is she? Known for her bad fashion sense, a love for all things natural and the inability to get a second date, Poppy is beginning to wonder if she might be misaligned herself. Her route to self discovery will be an unnatural one - a plastic surgeon, a dilapidated house in Santa Cruz, a flirtatious client, and a blind date from the dark side.

It's all enough to send a girl - and her gal pals - running for the comfort zone of their spa.

This week, the Christian Fiction Blog Alliance is posting about Scoop by Rene Gutteridge

The Occupational Hazards Books are a series of books about seven homeschooled siblings whose last name is Hazard. The parents died in a freak accident leaving the kids ages 16-26 with a lucrative clown business but the kids realize that God has other plans which doesn't include being a family of clowns for the rest of their lives.

Scoop, is the first of the series and centers around Hayden, who was age 20 when her parents died. If you haven't yet guessed by the series title, this book is packed with many laugh out loud moments and great one liners.

Hayden is a strong Christian who, having been homeschooled, lacks some of the politically correct social norms...like not praying in front of everyone during a crisis. She finds herself in an internship at a television news station with a boss that takes stress pills, an aging news anchor that everyone wishes Botox on, a weatherman who wants to predict love for himself and Hayden, and a reporter struggling with his own politically correctness of being a good reporter and being a Christian.

A smart and funny read.The book link for

To learn more about the Landon Snow series take the time to visit the Landon Snow website. If you know any young reader(ages 9-12) or any fan of good old fashioned fantasy books, consider buying this series as a Christmas gift for them. It is a great way to give the gift of the Word without forcing them to listen to a sermon.

What books does this series bring back memories of? My younger reading days were filled with the Tom Swift, Jr. series. Then I moved on to the Perry Rhodan series. In the fantasy line, I started with the Narnia books and Ursula K. Le Guin's Earthsea. After that, I graduated to Michael Moorcock's various Eternal Champion stories and Roger Zelazny's Amber books. What about you?

CSFF Blog Tour-Landon Snow & the Island of Arcanum by R.K.Mortenson

Landon Snow and the Island of Arcanum is a great fantasy adventure for readers of all ages. Reading the Landon Snow series will stir up your memories of C. S. Lewis' Narnia books. Both reflect the sense of wonder and mystery that the Bible contains(and too often as we get older, we forget the excitement and wonder). It is exciting to read a new series that is well written and contains traditional fantasy elements like talking animals, good versus evil, and the faith walk of a person as they are growing up.

If you have a young(or any fantasy) reader that you are looking for a Christmas present for, pick up the 3 Landon Snow books that are available. 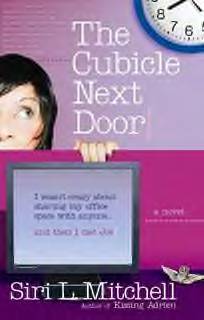 This week, the Christian Fiction Blog Alliance is posting about The Cubicle Next Door by Siri L. Mitchell.

If you like blogging...which you must if you are reading this...you will think this book is blogarific. After each chapter, there is a blog entry. The book is written in first person and contains some hilarious blog antics.
The Cubicle Next Door is a fun read. Fans who like stories where opposites attract will enjoy this book.
The Cubicle Next Door is set in a civilian's view of working on a military post. That in itself is funny enough...then add that the main character is a tree hugging, anti-SUV lover, with a thing for Bollywood movies. (Her favorite it Bride & Prejudice.) Suddenly this civilian hippie is thrown into a cubicle next to an Air Force Pilot/Teacher who drives...yep...an SUV. Can't you feel the love?

Also, The Cubicle Next Door has some wonderful moments of self discovery. 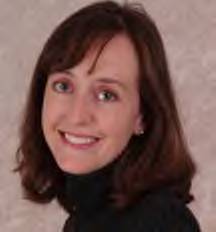 A delightful read...here is an excerpt for you:The Cubicle Next Doorby Siri L. Mitchell Released Aug 06

Excerpt from Chapter 1:“So what do you think, Jackie?”

What do I think? Funny Joe should ask me that. He’s just finished reading my blog. He’s just quoted me to myself. Or is it myself to me? Do I sound surreal, as if I’m living in parallel universes?

The blog—my blog—is all about Joe. And other topics that make me want to scream. But the clever thing is, I’m anonymous. When I’m blogging.

My brain is starting to short circuit.

If I were clever I’d say something like, “Look!” and point behind him and then duck out of the room when he turned around to look.

But there’s so much computer equipment stacked around my desk and so many cables snaking around the floor that I’d break my neck if I tried to run away. So that option is out.

I could try pretending I didn’t hear him. “What?”

“SUVs. So what do you think about them?”

But then we’d basically end up back where we started.

So how did I get myself into this mess?