Fans of Jack Vance's Dying Earth series will enjoy Trackers. This was originally conceived as book 2 of the Birthright Project. Book one, Outriders, is available but the publisher does not plan on continuing the series. This is the readers loss.

The young men and women of the Birthright Project are on a mission to preserve God's original creation from the fallout of the Endless Wars and human depravity. They battle future sorcerers, warlords and their mutant creations. Kathryn's imagination is displayed in this series. Starting with the new ark beneath the polar ice cap, people being delivered to the surface world by whales, to the description of the decadent city. This is a world with with gargants(giants), the shroud, mysterious sorcerers, and many other interesting people and things.

What makes this book stand out is the combination of Kathryn's imagination and her focus on the human heart. Despite the many physical changes that the sorcerers have brought about in their effort to become like God, the core conflicts of humanity are the same as we face today. Can the Birthrighters overcome their individual desires to keep the group intact and accomplish their mission? This is the same type of conflict that began in the garden of Eden and conitinues through our time.

Highly recommended for fans of speculative fiction.
Posted by Jim Black at 10:00 AM No comments: Welcome back for part 2 of my contribution to the tour for Trackers by Kathryn Mackel. Kathryn has a website devoted to the Birthright Project. Trackers is book 2 in the series.

I am reading(and enjoying) Trackers now. My review will be published next week.

Instead of a review, I thought I would reflect on the whole Dying Earth subgenre. It was named after Jack Vance's Dying Earth books. Wikipedia has a good article that gives you a basic listing of books in this catagory. The books I refer to in this section are not necessarily Christian books.

Some of the stories that I remember are:

Gene Wolfe-The Book of the New Sun-someday I have to re-read and review this series. Wolfe is a Christian and the hero of this story is a disgraced torturer who is on the path of redemption. Wolfe is excellent at working Christian themes into the background of his tales.

Mark Geston-The Siege of Wonder-I read this book back in 1976 and I have never forgot it. Parts of it are poorly written, the ending is terrible, but Geston's innovative ideas carry stay with you. The main plot of the book is an invasion of wizards(with magical powers) into the modern scientific world. This book is one that I regret not keeping in my collection. This is a theme that I would like to tackle from a Christian point of view.

Don McGregor-Killraven-one of my favorite comic book series. Created as a sequel to H.G. Wells' War of the Worlds, this series was based on the idea that the Martians returned and conquered the Earth. Humans were mainly used as breeders or gladiators. Killraven was one of the gladiators. He managed to escape and gaither a group together to become freedom fighters. The group travelled through eastern North America on a search to find Killraven's brother. Some humans, and animals, were experimented on by the Martians. This part reminds me of Trackers.

What are some other Dying Earth type stories that you have read?

Please take the time to visit other participants in the tour. 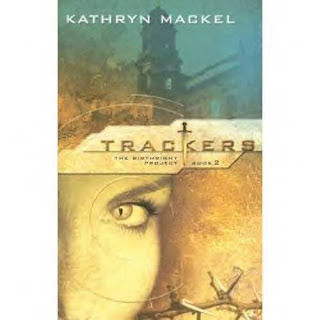 This month's Christian Science Fiction and Fantasy tour is focused on Trackers by Kathryn Mackel. This is book 2 in the Birthrighters Project. I will not be done reading this in time for the tour, so my review will appear later in the month.

As this is a story about humanity after a time of great wars, it has me thinking back to some of my favorite stories with a similar(but different) setting.
Tomorrow I will post some of my thoughts on this type of story. When it is handled well(and what I have read of Trackers is very good), it can be one of my favorite subjects to read.
In the meantime, please take the time to visit the other members of the blog tour.
Jackie Castle, Valerie Comer, Frank Creed, Gene Curtis, Chris Deanne, Janey DeMeo, April Erwin, Beth Goddard, Todd Michael Greene, Karen Hancock, Elliot Hanowski, Katie Hart, Sherrie Hibbs, Sharon Hinck, Joleen Howell, Jason Joyner, Karen and at Karen¹s myspace, Oliver King, Tina Kulesa, Mark Goodyear, Lost Genre Guild, Kevin Lucia and The Bookshelf Reviews 2.0 - The Compendium, Terri Main, Rachel Marks, Shannon McNear, Rebecca LuElla Miller, Caleb Newell, Eve Nielsen, John Otte, Cheryl Russel, Hannah Sandvig, Mirtika Schultz, James Somers, Stuart Stockton, Steve Trower, Speculative Faith, Chris Walley, Daniel I. Weaver
Posted by Jim Black at 10:48 PM No comments: 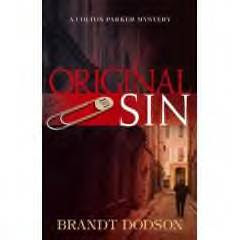 This is the book that started the Colton Parker mystery series. I previously reviewed(and enjoyed) the second book in the series-Seventy Times Se7en. The review is located here.

I am happy to say that this book is as highly recommended as Seventy Times Se7en.

Original Sin is an excellent introduction to the series. When the book starts Colton has already been fired from the FBI. Following his loss of employment, Colton's wife dies in a car wreck. He moves his 13 year old daughter in with his in-laws while he starts his new career as a private investigator.

Emma Caine is a popular high school counselor. When she is brutally murdered, her nephew(Billy Caine) is arrested. Billy's girlfriend hires Colton to prove his innocence. In the tradition of other great mysteries, this is just the start.

Colton shows his trademark humor, unwillingness to give up, and resentment towards God for his losses. The style of the book will remind you of Raymond Chandler. What sets Colton apart from other fictional detectives is his relationship with his daughter. He knows that he needs to be a better father but has no idea how to do it. Re-occurring characters such as FBI agent Mary Christopher, his in-laws, and his wife's pastor are there to help.

WARNING...once you start this book you will have a hard time putting it down.

Go right now and buy the first 2 books in the series. Book 3(Root of All Evil) will be available in January. A short story, Timing in Everything, is now available through the Great Mystery and Suspense Magazine website(http://www.greatmysteryandsuspense.com/index.html).

Follow this link to read my interview with Brandt Dodson(http://jimfictionreview.blogspot.com/2006/09/brandt-dodson-interview.html).

This week the Christian Fiction Blog Alliance is doing a tour for Never Ceese by Sue Dent. It is notable that Sue is one of our CFBA members!

Sue Dent was born and raised in Jackson, Mississippi and currently resides in Ridgeland. When not writing, Sue designs websites and works with digital photograpy.
Sue loves to hear from her fans through her Website in fact, the push from eager readers has already set the ball rolling, and she's hard at work on Forever Richard, the sequel.
In Never Ceese, Sue sets out to prove that faith and fun can live happily in the same story, and that vampire/werewolf fantasy can have a spiritual message too.
ABOUT THE BOOK:
Never Ceese takes religious fantasy to a new level, bringing an entirely new Light to a very dark side of fiction, doing a very admirable job to prove that vampire/werewolf fantasy does not have to be evil to be enjoyed.
The story starts with the classic tale of an English manor owned by Richard, the vampire who righteously is the bain of his neighbor's existence, what with the missing goats and all!
Then enters Cecelia, better known as Ceese, the young werewolf maiden who's arrived via invitation by Richard's aging companion, Penelope.
Ceese and Richard would prefer to tear each other apart, literally, but they are drawn together by their mutual love for Penelope. She is dying and has one request...that the two of them love one another.
This is the overall theme throughout Dent's interesting tale of two who were wronged but learn to work together. Meanwhile they are threatened by an evil stem cell researcher who wants the immortality and power that he thinks their blood will bring him!
Dent's characters do differ from the stock one's we're all accustomed to in a very important way.
They are not mindless, brutal killers. Bloodthirsty, yes, but they are constantly resisting the urge to kill, and, thus, curse another human. Feeding on rodents, goats, virtually any warm-blooded animal helps to satiate the never ending thirst for blood, but how long will they be able to resist that most delicious morsel man?
There is a chance that their curses can actually be lifted if they can find the strength within to resist their selfish natures and act selflessly toward another. Will they succeed? That same basic choice lies before us all every day...
A vampire and a werewolf, one determined to, once again, be able to acknowledge what will get her to heaven, the other no so sure he can. A spiritual fantasy designed to spark the imagination, to speak to the heart as well as entertain.
The Never Ceese book link: http://www.amazon.com/exec/obidos/ASIN/1599580179
Sue Den't website: http://www.neverceese.com/
Posted by Jim Black at 9:58 PM No comments: