This week, the
Christian Fiction Blog Alliance
is introducing
THE HEIR
(Bethany House March 1, 2007)
by
Paul Robertson
ABOUT THE AUTHOR:

Paul Robertson is a computer programming consultant, part-time high-school math and science teacher, and former independent bookstore owner in Blacksburg, Virginia. This is his first novel.
ABOUT THE BOOK:
Jason Boyer Just Got an Inheritance to Die For
The fortune wasn't supposed to befall him. Jason Boyer had known all along his father's business empire would pass to different hands. Which suited him just fine. The money was crooked and the power corrupt. But when an accident claims the old man's life, everyone is stunned by the unveiling of the will. With the passing of the Boyer crown, power-hungry politicians and shady business partners all try to force Boyer's hand. Fighting the temptation of influence and riches, he simply wants to be a better man than his father--but attempting to stand for what’s right soon brings murderous consequences. As those closest to him are endangered--and news emerges that his father's accident may be something more sinister--Boyer finds himself fighting for his soul…and his life!
Is There Any Escape for The Heir?
All the money he could ever crave. In the splintering crash of a car plunging through a railing, Jason Boyer's life is changed. All the fame he could ever desire. But the last thing he wanted was the throne of his father's corrupt business empire. All the power he could ever wield.The estate should have gone elsewhere, but the will was changed. And now everything is Jason's. But gaining the whole world just might cost him his life.

THE HEIR is a Grisham-like tale of intrigue and murder with a lot of humor and well-drawn minor characters.

"In THE HEIR, Paul Robertson serves up politics, privilege, and murder with a side of acerbic wit. What a fabulous book--a great mix of angst, humor, and ultimately, hope."T.L.HINES--author of Waking Lazarus and The Dead Whisper On
Posted by Jim Black at 9:44 PM No comments:

This week, the
Christian Fiction Blog Alliance
is introducing
A BIGGER LIFE
Navpress Publishing Group (January 15, 2007)
by
Annette Smith
ABOUT THE AUTHOR:In 1997, Annette was working as a home health nurse. She traveled the back roads from house to house, caring for ill and injured, homebound people. Because of her unique position in the lives of relative strangers, she often found herself bearing solitary witness to intimate behind-the-scenes situations full of grace and meaning. The desire to honor both a particular patient and a poignant scene involving the woman and her husband prompted Annette to write a fictionalized story, The Anniversary.
That first story appeared as a column in the Houston Chronicle newspaper and as an essay in Today’s Christian Woman magazine. Later it became a chapter in Annette’s first and best-selling book of short stories, The Whispers of Angels, that has sold more than 100,000 copies
Since then, Annette has penned four more books of stories, two volumes on parenting, and the Coming Home to Ruby Prairie trilogy.
Annette and her husband Randy, a High School teacher and coach, make their home on a wooded lot in Quitman, Texas. They are the parents of two young adult children, Russell and Rachel, both out on their own. Wally, a grateful, rescued mutt provides warmth and entertainment and keeps the Smith’s empty nest from feeling too lonely.
In addition to writing, Annette continues to serve part-time as a registered nurse. She finds the people she works with and the patients she cares for provide great inspiration for her fiction.
ABOUT THE BOOK:
Joel Carpenter did not plan for his life to turn out like this. He never meant to be a single dad, working at a hair salon in Eden Plain, Texas. But after making a careless choice four years ago, his marriage was permanently shattered. Now at twenty-seven, he finds himself juggling custody of his preschool son with Kari, the ex-wife he still loves, and sharing Sunday dinners with a group of other single dads.
Joel regrets the choices that brought him to this place, but it's not until the worst happens that he learns how much he still has to give. In the midst of deep tragedy, he learns that forgiveness is way more important than freedom. Hopefully it's not too late!
A BIGGER LIFE is a story of love in the midst of heartache, and friendship in the midst of real, everyday life.
Posted by Jim Black at 10:00 PM 1 comment: 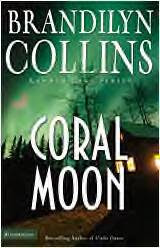 ABOUT THE AUTHOR: Brandilyn Collins is the bestselling author of Violet Dawn, Web Of Lies, Dead of Night, Stain of Guilt, Brink of Death, and Eyes of Elisha just to name a few.

Brandilyn and her family divide their time between the California Bay Area and Coeur d'Alene, Idaho.

She also maintains an informative blog called Forensics and Faith where she daily dispenses wisdom on writing, life, and the Christian book industry.

The figure remained still as stone. Leslie couldn't even detect a breath.

Spider fingers teased the back of her neck.

Leslie's feet rooted to the pavement. She dropped her gaze to the driveway, seeking...what? Spatters of blood? Footprints? She saw nothing. Honed through her recent coverage of crime scene evidence, the testimony as last month's trial, the reporter in Leslie spewed warnings: Notice everything, touch nothing...

Leslie Brymes hurries out to her car on a typical workday morning...and discovers a dead body inside.

Why was the corpse left for her to find? And what is the meaning of the message pinned to its chest?

In Coral Moon, the senseless murder of a beloved Kanner Lake citizen spirals the small Idaho town into a terrifying glimpse of spiritual forces beyond our world. What appears true seems impossible.

And as Brandilyn would say...

Presently this Kanner Lake Series of books has its own character blog called Scenes and Beans. Stop by and visit the folks from Kanner Lake!
My review will be posted tomorrow.
Posted by Jim Black at 9:32 PM No comments:

This week, the
Christian Fiction Blog Alliance
is introducing
IN HIGH PLACES
(Bethany House March 1, 2007)
by
Tom Morrisey
ABOUT THE AUTHOR:
Tom Morrisey is the author of four previous novels and numerous short stories, a world-renowned adventure-travel writer whose work has appeared in Outside, Sport Diver (where he serves as Executive Editor) and other leading magazines.
He holds an MA in English Language and Literature from the University of Toledo and an MFA in Creative Writing from Bowling Green State University. He lives in Orlando, Florida.
ABOUT THE BOOK:
For Patrick Nolan, every climb tells a story. And now maybe it's his own …. He's right at the rim, staring over the cliff's knife edge and wondering how things went wrong so quickly.
It all started after arriving home from a weekend climbing trip with his father, Kevin. That's when word reached them. In a silent moment, they'd lost the person most important to them—her death raising unanswerable questions and dangerous doubts.
Launching a new life in a new town to escape their pain, son and father find themselves in danger of being torn apart forever. As his father seeks a route to solace on the dangerous high face of the rock, Patrick finds a path to hope with the unlikeliest of allies—a pastor's daughter. Together they must discover the one answer that can bring Patrick and Kevin back from the brink of the precipice.
Endorsements:
"It is rare to find a 'man's man' who knows the human heart, much less one who can write with such a well-balanced combination of sensitivity and adrenaline-charged adventure."—Athol Dickson, Christy-Award-winning author of River Rising
"Beautifully exciting, haunting, and satisfying. Morrisey leaves you hanging by your fingertips."—Lisa Samson, award-winning author of The Church Ladies and Straight Up
"Tom Morrisey is a master wordsmith and an expert at weaving gripping stories. If I pick up a book with his name on it, I know I'm going for gold."—Angela Hunt, author of Uncharted
Posted by Jim Black at 8:22 PM No comments: