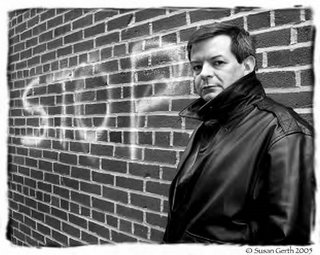 Many thanks to Brandt Dodson for taking the time to answer my questions. My review of Brandt's Seventy Times Se7en appeared yesterday. Today we will talk about some of his favorite books and movies.

The Bedford Review(TBR): Who is your favorite character in a Dashiell Hammett book? After reading Seventy Times Seven, I would quess Sam Spade.

Brandt Dodson(BD): You guessed correctly. Sam Spade has come to typify the PI, and that is in no small measure to Hammett’s skill. Although there were actually very few Spade stories published, he has carved out his niche in American literature.

TBR: What is your favorite Hammett book?

BD: Probably no surprise here, either. Phillip Marlowe. Although I don’t think he has the edginess that Spade has, he has also come to typify the PI.

BD: The Big Sleep. This was made into a move, twice. Once with Bogart in the role of Marlowe, and once with Robert Mitchum in the role. No offense to the late Robert Mitchum, but Bogart nailed the character. Of course, that’s my opinion --- and the opinion of many others.

TBR: Have you read any of the Hard Case Crime novels? If you have, do any of the books stand out as better than the rest?

BD: The Hard Case line, from Dorchester publishing, is opening a whole new world for today’s readers. I like the reprints from “days gone by”. No offense to Stephen King, but The Colorado Kid, just doesn’t have that noir feel that the earlier writers were able to conjure up.

TBR: I recently started reading Lawrence Block's Burglar series. Have you read them?

BD: Yes, I have. Some of them. Block is an excellent writer. I’m reading Hit List right now.

TBR: Are you a fan of Humphrey Bogart movies? I started as a fan of his movies and that led me to trying different mystery writers.

BD: You and I have a great deal in common. I am also a big fan of Bogart’s and I reference him in my first novel, “Original Sin”, as a way to pay homage to the man. Like you, his roles led me to begin reading the novels from which his movies were made.

TBR: How much of Brandt Dodson is reflected in Colton Parker's character?

BD: A fair amount. But then, there’s some of me in all my characters. Like Colton, I did work for the Indianapolis office of the FBI, but unlike Colton I was not fired. Like Colton, I am a father. But unlike him, I am still married and have two boys who are well adjusted. But in the sense that Colton is headstrong, and needs to feel in control of his life, I am very much like
him. At least, I was before I came to Christ.

TBR: Can you tell us a little about how you became a Christian?

BD: I was raised in a home where my mother, and both grandmothers were Christians. But like my character, I tended to go my own way. I was pretty headstrong and wanted to cut my own path toward what I thought was success. And in fact, I did just that. But it left me feeling empty.
One night, I read a book “The Late Great Planet Earth” by Hal Lindsey which got me to thinking along lines of eternity. And then I read Born Again, by Chuck Colson. He mentions that he had clawed his way to the top of the world, and it had all come crashing down. He says that he never accomplished in the White House, what he had been able to accomplish in Christian ministry – changing people’s lives. I began to realize that he was right and that only what we did for Christ would last into eternity. I heeded the call of God.

BD: Several, but I tend to turn toward the psalms more and more. David wrote a book that speaks across time. There is no one who hasn’t felt David’s anguish, or his joys. Every prayer he prayed, every praise he offered, fits with life today. That just tends to support the notion in Ecclesiastes that there is nothing new under the son. If I could write a book like that, one that would fit across all generations, and be relevant for all time, my life would be fulfilled.

BD: I have many that I rely on, and it seems to change as circumstances change. But at the moment, it is Psalm 37:4. “Delight yourself in the Lord and He will give you the desires of your heart.”
It is tempting to begin writing for “success”, but it will only come when the work is done for the Lord. That’s why I love writing for the CBA. It helps to keep me focused.

TBR: Anything you would like to tell our readers about plans for the Colton Parker series?

BD: Colton will return in “The Root of All Evil” to be released in mid-January, and I am writing another Colton Parker novel to be released, tentatively, in early July. Colton is going to experience some significant trials, but he will also undergo a change in is way of thinking. (Trials seem to do that, don’t they?)
As for Colton’s relationship with Mary, stay tuned.

I will try to keep readers updated on Brandt's work. For additional information, you can find his website here.
Posted by Jim Black at 9:31 PM